The Malay College Kuala Kangsar (MCKK) had their Students Art Exhibition held at The British Council, Bukit Aman, Kuala Lumpur, from 27th April until 2nd May, 1970.

It was a first of such a feat by any school standard in the country. The event had culminated after what came about in the school’s campus from the year prior.

The Malay College Art Group or the so-called “MCKK Art Club” was abuzz with activities in 1969. Students from various groups came forth and were motivated by the encouragements of their Art Teacher.

The Form 3 students were dabbling with paints in the Art Room.

An Art Exhibition showing the collection during the school’s Speech Day: 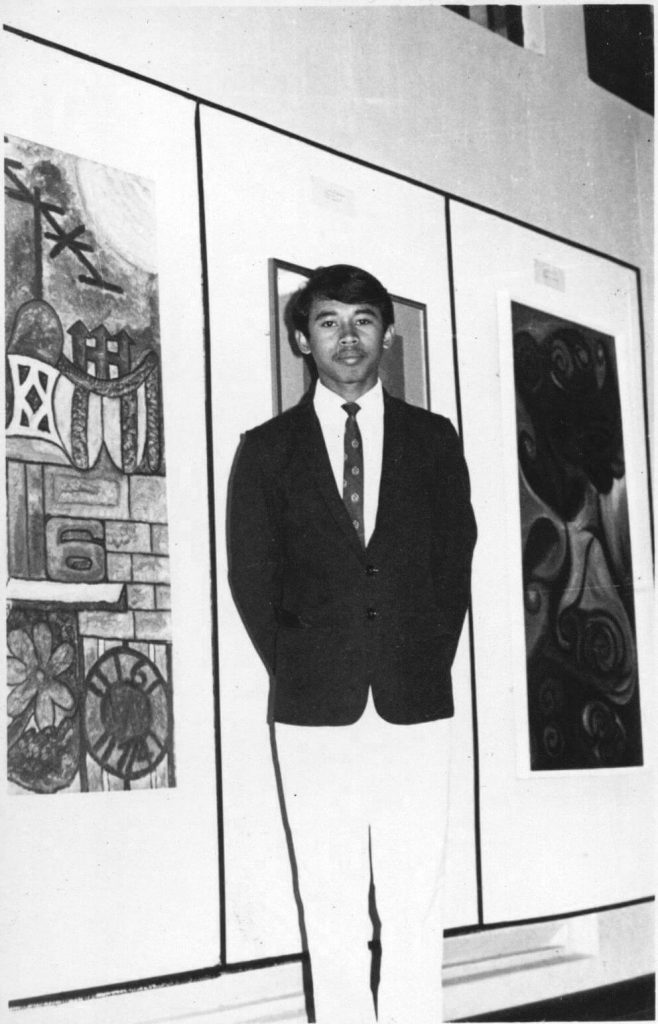 End of Year statement as appeared in the 1969 MCKK School Magazine: 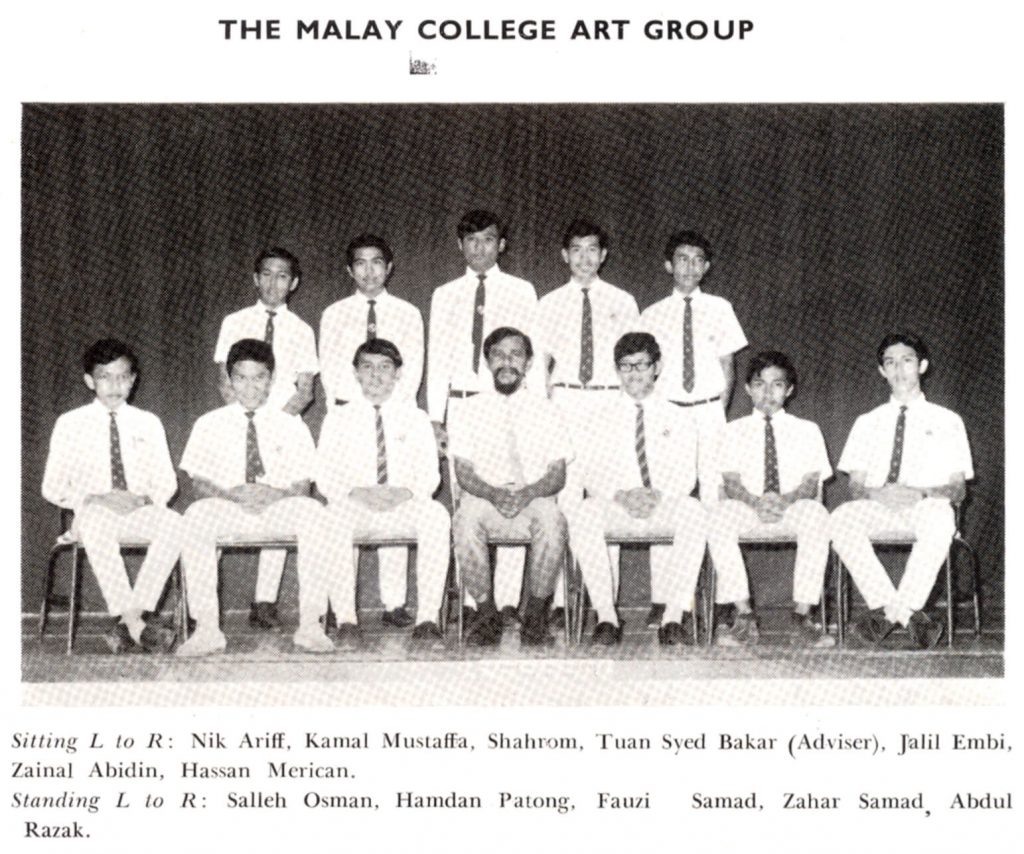 Many visitors to this year’s Art Show have shaken their heads at the sight of the pop-futurist paintings and said, ‘My son could easily do that. Nothing else but a splash!’ Such was the view shared by nearly all the visitors. Another prominent visitor remarked, ‘Gone are the good old days when paintings were really paintings.’

We do not bother ourselves with such trivial remarks. After all, most of them declined to purchase any of the paintings. The personalities who were represented in the exhibition were: Shaharun Harun, whose psychedelic pop graphics indicate his virile passion for protest music; Kamal Mustapha and his pessimistic, abstract and expressionistic paintings which are unfathomable. With his creative experiments predominating the show, he can be acclaimed as one of Malaysia’s rising young artists.

We were greatly honoured by Mr. Frank Sullivan’s visit to our exhibition in late June. His offer to put up our paintings in Kuala Lumpur is indeed a blessing for Kuala Kangsar’s restricted and limited environment often cripple creative thinking.

Finally we would like to thank our adviser, whose boundless energy and intellectual philosophy has been our constant source of inspirations. We would also like to thank Hassan Merican whose excellent workmanship in carpentry has made the framing of the paintings less costly. We thank also the Headmaster, Inche Aziz who with his wide knowledge of the Arts, has been a friendly and helpful critic. 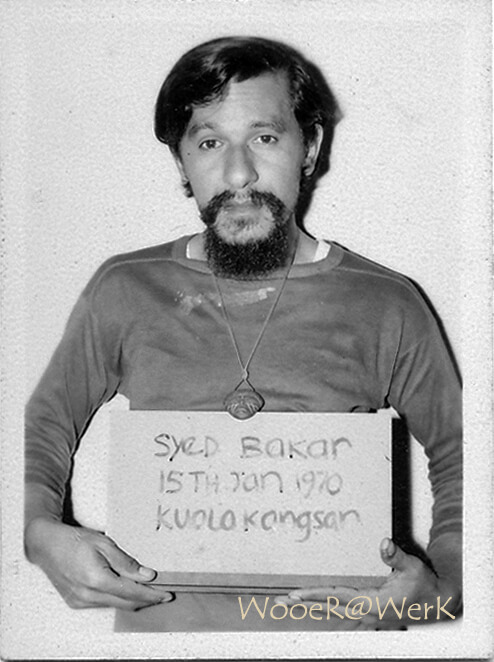 The College reopened for the second term and the atmosphere of the campus seemed a lot livelier, and more “crowded”. Welcome back Lower Sixth Formers’.

The College bus left for Kuala Lumpur loaded with our artists and their masterpieces to be exhibited in K.L. This was the very first time in the history of the College that she was given the chance to exhibit the masterpieces of her talented artists to the public. MC is the first school in the country ever to achieve such a distinction!

A talk given by Dr. Mubin Sheppard on “The Life of Capt. Speedy” was held in the Hargreaves Hall. The meeting was organised by the Malayan Historical Society.

Sixth Form vs Fifth Form at Soccer. Winner – Fifth Formers – for the first time ever.

At Event Venue on the Opening Day: Inside the Exhibition Hall:
Some exhibits in my picture collection. 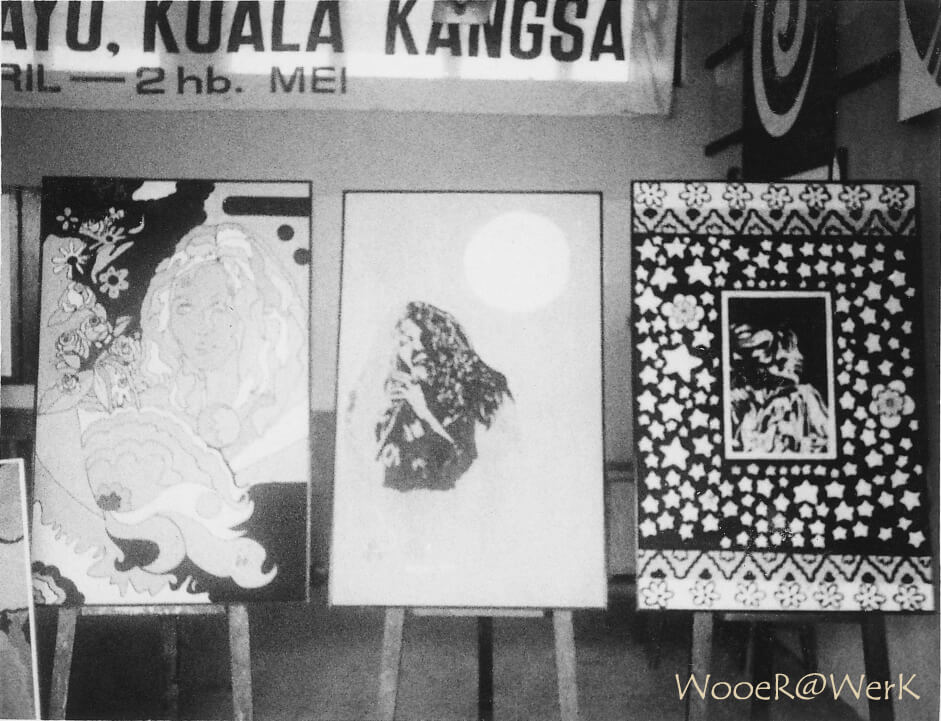 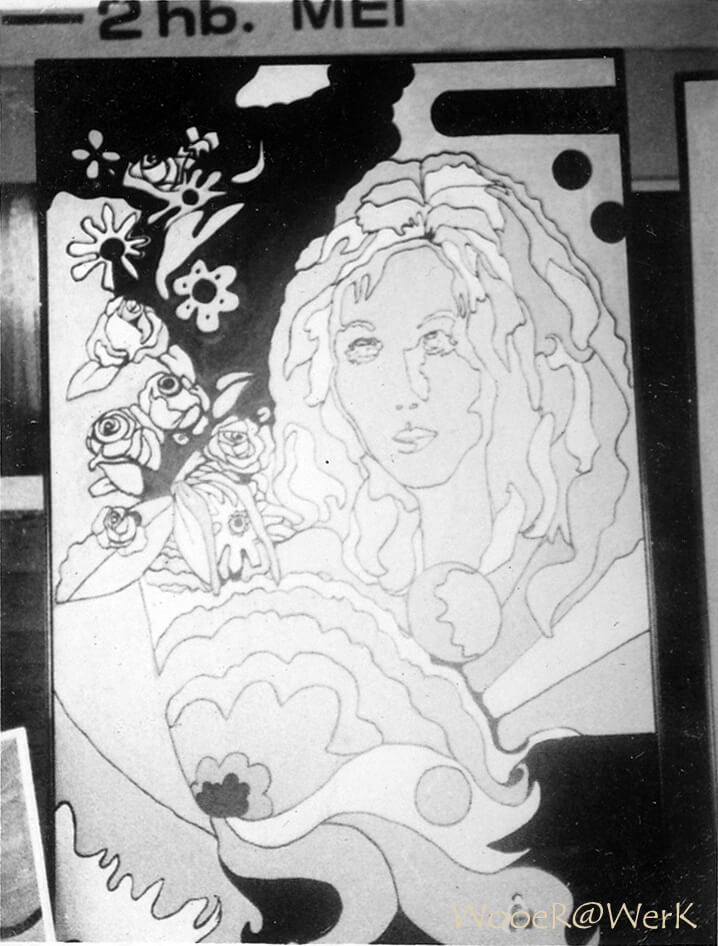 The Form 4 boys from Batch 71 came in support of the Art Exhibition.

The boys from Batch ’69 attended the 1970 MCKK Art Exhibition, prior to their SCE/MCE exams results: 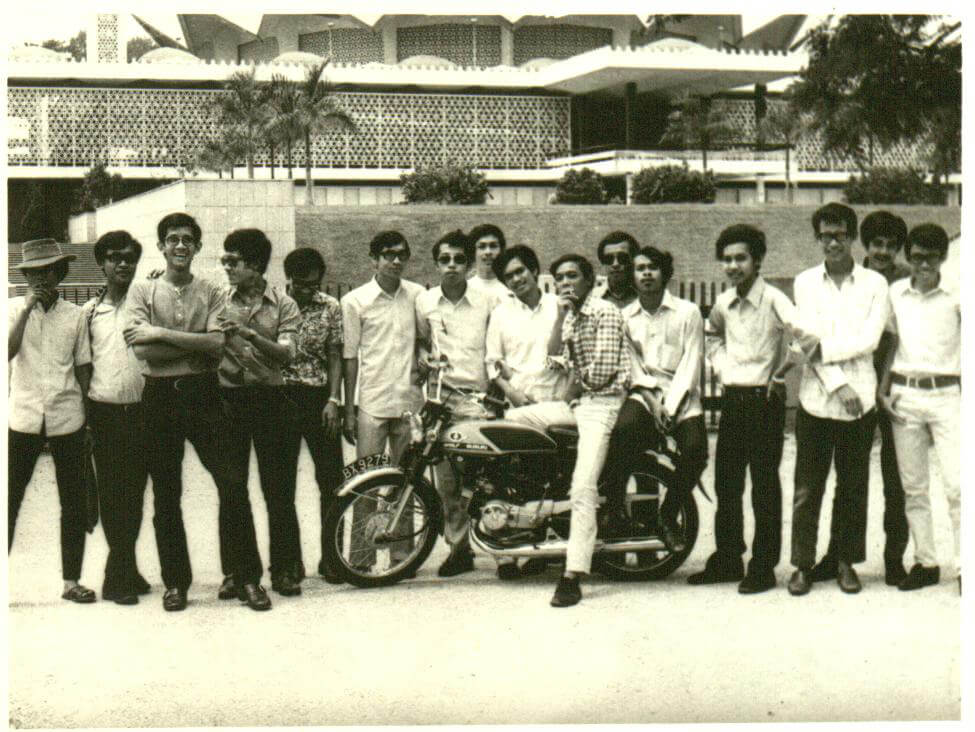 At the Bukit Aman foothill carpark next to the Kuala Lumpur National Mosque.
[Some of the students managed to obtain their driving licenses.]

The Art Club members as appeared in the 1970 MCKK School Magazine: 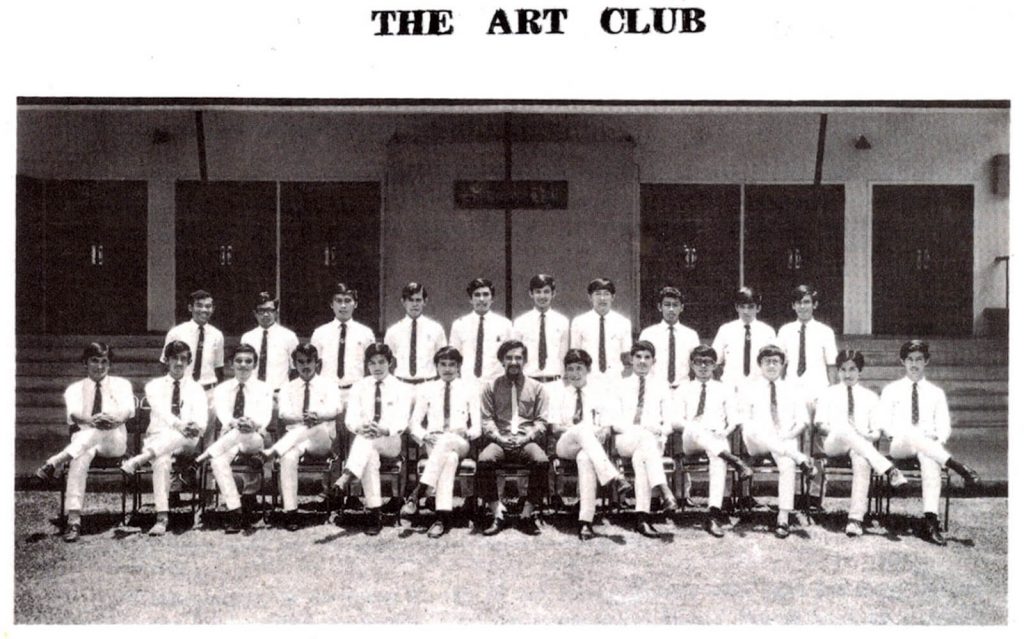 Report on the Art Exhibition, excerpt from the 1970 MCKK School Magazine:

One hundred and five paintings and five sculptures produced in under six months; it almost seems as if sheer productivity is the main point of the Malay College Art Exhibition at the British Council in Kuala Lumpur. A great variety of techniques is on display – from pure line to atmospheric impasstos, with everything in the way of dots, curlicues, and splashes in between.

This exhibition is not then. just like any other Art Exhibition. It is a composition of visionary compositions. If the accompanying words are not always adequate, if they are so many of them different ways of saying ‘something’ they are simpler and better than most words about Art, and they give the clues. I should call this Art Show the purest and clearest activity of young artists in this country.

Some of the exhibits presented the figurative as well as the non-figurative each in its validity; all of them show that the something they feel themselves to be driven, the something they feel themselves to be recognising can be arrested in a leap of imagination by a variety of media. The most artistically aware of students to day are much more fluid in their notion of what art can do.

The boundaries for them between all the forms emerge. The chief interest lies in the thirty-eight paintings of Kamal Mustafa. They express an odd mixture of anxious awakening and melancholy sustained by Kamal’s inventiveness; the way he can fill or occupy space with decorative flourishes. Sometimes though, this inventiveness seems almost like a nervous tic so that no two eyes in the one head are allowed to be represented in the same style. In ‘Point Blank’ his energetic style and sombre colour effectively captures the merging of violence and discipline in a police state.

Deceptively simple it is a masterpiece of realism and of calculated intervals: a shot has been fired the rifle smoke hangs in the air. Watchfulness alarm and tension are marvellously created by the exact placing of symbols in a landscape of chaos. But really striking is the rhythmic mastery of all his works. That his output is prodigious is well known and the variety is surprising. Kamal stands like a giant at the gateway to an epoch in Art and on meeting this marvellously brilliant artist you suddenly become aware of considerable activity.

Aside from Kamal, another young painter emerges from this show as a master Zabas who pours the spirit of air over all objects, and new-creates them of light and sunshine. The world of Zabas is often absolutely idealised, essentially of the Golden Age. The ideal life is full of repose, idyllic. but it is purposeful too. Man must also watch and work, he must use Nature. In his several distinct versions of ‘Tempest’ he seems to be touched by a mildly satirical element. In ‘Inferno’ a powerful tension between fact and vision is at work: the whole picture generates an obscure unease.

Even more eye-opening are the fascinating collection of Shahrun’s posters, twenty-one in all, with their constant stylistic allusions to the current Pop scene. Here, ideas fall over each other in riotous profusion giving the posters the character of a sympathetic but often gently mocking musical survey.

‘Purple Max’ and ‘God, Pen, Train and Dough’ are beguiling by their richness of humour and illustration alike. The way each colour blends into the next in a ecstatically happy, endless ‘music making’ which pervades the whole collection. ‘The other side of ’69’ is a superbly executed and outlandish pen and ink drawing, reminiscent of the poundings of a taut drum.

Colour is the element among the other paintings. ‘Duel to the Death’ by Shamsuddin Mohd. is almost Expressionist, an extraordinary composition with something of tho ‘lyrical’ in it. What intimate muffled conflict is being evoked in Raja Azmee’s Sardonicus – a strong, dramatic picture painted most alluringly in subdued pervasive greys and blues. The decorative influence of Japanese Art is partly suggested in a painting by H. Hashim, ‘Twilight Flora’ where the trees have the texture of rich material and make tassel-like patterns where they meet the sky: yet the feeling is fresh and open.

Two contrasting non-figurative scenes show Hassan Merican in his best space handling mood. He keeps distinct styles apart, and concentrates on playing separate stylistic features against each other. Line, shape, colour and texture are organised in brilliant counter-point. ‘Purgatorio’ is a spacious study in curves and straight lines. Mystery and jokes are the two main elements in Rosli Mohd. Ali’s ‘View from my window and One pair of Eyes’. Tg. Akmash’s ‘Daybreak’, ‘Death at Railroad Crossing’ is a dramatic piece, although containing no human actors. Fathil Rahman’s ‘Ibu dan Anak’ haunts the mind with its new ways of expressing loneliness, frustration and defeat.

Nik Ariffs portraits done in pastels are distractingly fetching. The style is simple and predictable. You confront the faces physically but without involvement, yet they have the capacity to astonish, to exhilarate with something new. In an illustration of ‘Aldiborontophoscophornio’ by Latiff, the tragic, mythical figure looks heroic, humorous and human all at once Latiff is a master of the casual but dramatic composition. Hashim Ismail’s ‘Kampong Ayer’ is beautifully atmospheric and captures an open-air healthiness. Angularity and unease show in Zainuddin Hussein’s ‘Chaos’.

The tension is signalled by the heavy colour mixes and the lines take on a threatening presence. Zainuddin’s ‘Beat Generation I’ and ‘Beat Generation II” are an index of his ‘psychographic’ style. Strikingly varied, their lines have been allowed to run here and there so that an airy, leafy freedom is created. Abdul Razak’s ‘Square One’ is paradoxically concerned with movements and the passage of time. The painting is broken into a vivid pattern, equally expressive in formal interplay and its record of cosmic commotion.

Amongst the sculptures Kamal Mustafa is once again outstanding. In ‘Dissent’ he is particularly good at combining ‘hard and soft’ edges, at playing off a rigid, strictly linear edge and an indeterminate ragged edge. Plaster is an expressive device and where it seems broken it is exposing something of its inner structure. The generally upward movement of ‘Dissent’ is further enlivened by the insertion of a flexible strip of wood; and it is countered by a certain amount of formal activity on the horizontal.

The application of the craftsman is almost too evident. ‘Family Group’ composed of three separate pieces by Zainuddin Hamid Hussein retains considerable traces of having been found. Together they generate more activity in each other than individually. The glossy coating of black paint helps to create their lightness and unity of movement.

Since this an unusual departure for the Malaysian Arts Council in sponsoring a School Art Show, I am for ever grateful to the following without whose help this exhibition would not be a success: 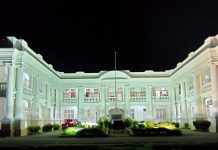 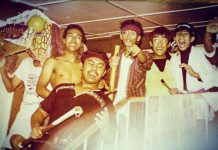 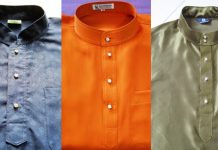