In Perak’s picturesque royal town, the MCKK shows physical signs of ageing, and some licks of paint would do much to improve the first impression.

Obviously, some Malay College Old Boys read this column because I received about a dozen messages of curiosity after I wrote that I’d describe my trip to the Malay College of Kuala Kangsar (MCKK), fulfilling an invitation by the headmaster.

One old boy of the Sixties predicted that I would be scathing, lamenting dejectedly: “If you want to see how much the Malaysian education system has deteriorated over the years, just look at MCKK. It is a perfect symbol of how things have gone wrong.”

Coming from an old boy, that was instructively candid.

Certainly when I arrived at the school, nestled in Perak’s picturesque royal town, there were physical signs of ageing, and some licks of paint would do much to improve the first impression.

Immediately in the entrance lobby are signs of the school’s illustrious history: plaques commemorating events from generations ago that probably enhance the self-confidence of the teachers and students who walk through it.

An adjacent waiting room has shelves crammed with trophies, shields and mementoes of equally ancient provenance.

In a classroom, I saw the fruit of the international relationships that the MCKK has cultivated, including youth summits and sports fixtures; they have a particularly special relationship with Vajiravudh College in Bangkok.

I was shown a dormitory of the Mohd Shah house, named after the Yang di-Pertuan Besar of Negri Sembilan who co-founded the school in 1905. The other three houses are named after Sultans of the other Federated Malay States.

In the old days, princes were not allowed to be in the house corresponding to their state, presumably to prevent overzealous expressions of state patriotism and to instead inculcate loyalty to the school.

Today, the school enjoys the patronage of all nine Rulers.

After meeting the relaxed senior boy charged with the heavy responsibility of overseeing the dormitory, I joined the Form Ones for lunch.

Their discipline was impressive: after synchronised seating and prayers, barely any clanging was heard from hundreds of forks and spoons against the metallic dishes as ravenous appetites were appeased before an afternoon of activities and further studying.

I informed the students that I had come to the school having met many illustrious alumni, and that they should be mindful of this institution’s role in the life of the nation.

Headmaster Anand Baharuddin is working to ensure the school continues to play a leading role.

New developments include the International Baccalaureate wing: so far, the only other school offering this in the government system is Tunku Kurshiah College, mirroring the anecdotal propensity that MCKK old boys end up marrying TKC old girls who produce offspring who repeat the cycle.

Next month, the school will for the very first time in its 107-year-old history participate in an international competition outside Asia, courtesy of its new Robotics Club who will be sending a team to the VEX Robotics World Championship in California.

However, the headmaster is also inspired by history on campus.

Astoundingly there are two courts for Eton Fives, which he says he wants to restore – but who they will play against is baffling, as there are probably no other courts within a four-hour flying radius.

I spotted a dilapidated, probably once gorgeous house nearby – Norton’s House, they call it – but as so often is the case with decaying buildings in this country, it has proven difficult to find sufficient interest and money to restore it.

I have seen this mismatch of ambition with resources in so many schools I’ve been to recently, whether or not they have a historical legacy.

Of course, the nation’s coffers cannot endow every school with the funding that the elite private schools enjoy, but empowering teachers and parents to make decisions without recourse to the ministry is something more easily done.

Indeed, in Malaysia today, the depth of concern from parents about their children’s education can be seen across ethnic and class lines: from the numerous petitions of the umpteen pro-PPSMI groups to the incident involving Deputy Education Minister Datuk Dr Wee Ka Siong on Sunday. 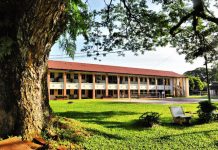 Whatever Happened to our School